Indoor air pollution contributes to millions of premature deaths every year and yet the problem is largely ignored. With the help of his family, one entrepreneur is developing a workable solution that’s accessible to the world’s poorest.

If you’re lucky you get to make a living from something you are truly passionate about. Ruben Walker is one of the lucky ones. Not only that, but the business he co-founded has the potential to save millions of lives. 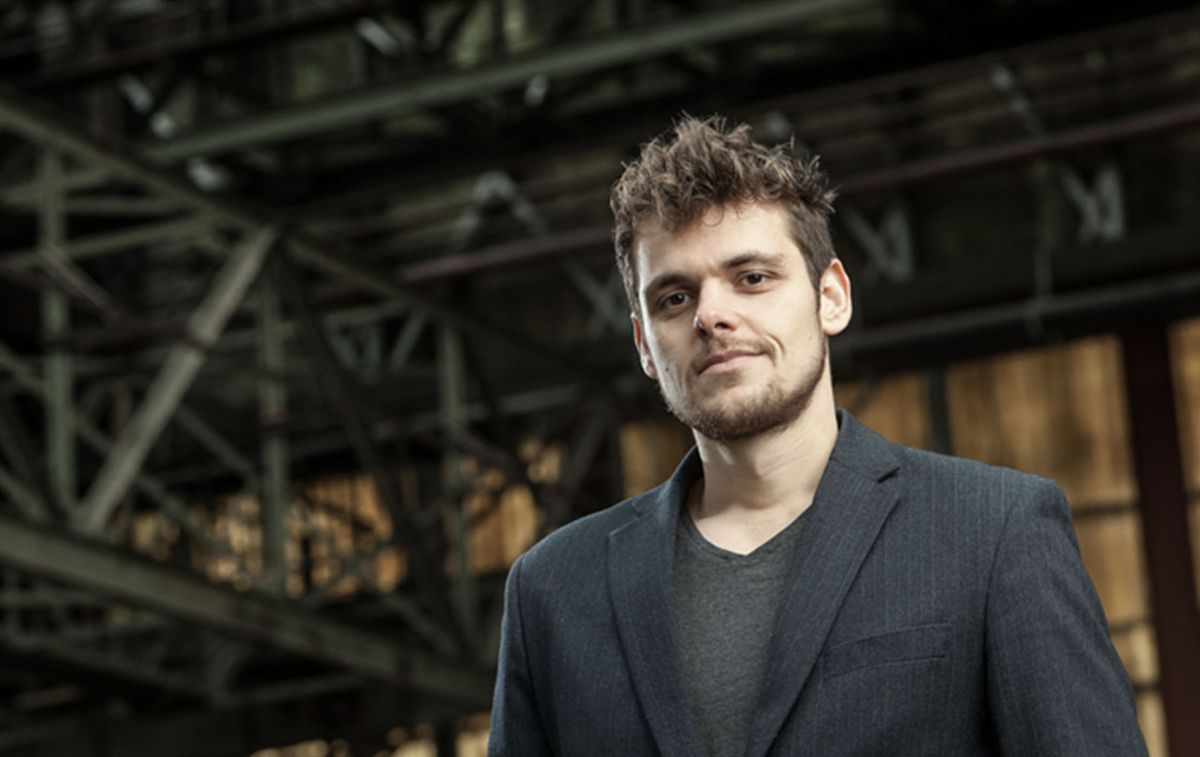 African Clean Energy addresses the massive problem of indoor air pollution, something that contributes to the premature deaths of nearly four million people every year. Exposure to this pollution doubles the risk of childhood pneumonia and contributes to lung cancer, stroke, heart disease and pulmonary disease. Yet many of us are unaware of the scale of this problem among people living in Africa on only a few dollars a day.

This changed for the Walker family when Ruben’s parents were living in Lesotho, in southern Africa. “It’s blatantly obvious that there’s a real problem around household energy consumption,” Ruben tells Invest for Good. “If you’re looking around 5.30 or six o’clock, there’s black smoke billowing out of people’s houses.” In addition, people spend hours collecting firewood for their cooking, a task that predominantly falls to women each day, cutting short their potential to study or do other things. It’s a dire situation. Sub-Saharan Africa is the only region where the number of people without access to clean cooking continues to rise significantly.

While many of us would feel powerless in the face of this depressing reality, Ruben and his father Stephen decided to take action. Out of their combined efforts came the ACE One in 2014. A cooking stove for those living off grid in the developing world, it can burn any solid biomass, such as sticks, animal waste, agricultural waste or whatever is lying around. With some clever but simple technology, it produces no harmful smoke and is very efficient and powerful.

I cannot think of a single industry where you can have as much impact on health, environment, poverty, gender equality, safety and security.

Crucial to the unique design is a 10-watt solar panel that charges the unit’s battery and can also charge a mobile phone and an LED light, providing basic electricity for a group of people who don’t have regular access to it. Ruben, now CEO of the company, says, “We certainly haven’t finished developing the product yet, but it’s at a level where we think we can offer an enormously positive service to our customers and we can keep adding improvements.”

Costing about $100 each, about 60,000 ACE One units have been sold to date. It’s a respectable figure, but the potential market for the product is unbelievably large - roughly 900m households could see their lives transformed by access to clean cooking, with untold additional benefits. “I cannot think of a single industry where you can have as much impact on health, environment, poverty, gender equality, safety and security,” Ruben argues.

It’s a mystery, then, that more competitors aren’t vying for this market. “To me, it’s mind-blowing how big this market is and how little interest there is from serious players,” Ruben says, adding that the active companies, like his, are all in the start-up phase. He thinks that one reason might be related to the sector’s track record for producing cheap products that are inferior and therefore don’t make much of an impact. Additionally, it’s not exciting to investors. “Framing the sector as 'clean cooking' doesn't make the macho VC world's blood boil,” the entrepreneur admits, “even though it’s energy for a third of the world’s population.”

Initially, demand for the ACE One outstripped supply, but African Clean Energy came up against an obstacle: cost. Even though $100 is not much money in developed countries, it’s a huge sum for people on about $3 a day. One solution was to work with capital partners to introduce microfinancing; another was hiring a local sales team to demonstrate it to people who aren’t even aware it exists, or of its potential savings. The money spent on basic energy consumption over time, the CEO estimates, can be cut by about 80 percent by using the product.

An exciting development is that the new ACE One will include a microprocessor and be sold with high-quality, second-use Samsung smartphones, giving it “smart” capabilities. For customers, that means they will be able to connect their phone to the product. African Clean Energy will also be able to implement a flexible “pay-as-you-save” model, because the unit can be switched off remotely if someone stops paying for it. A pre-installed ACE Connect app will help people to track their loan repayments and to contact customer services directly. 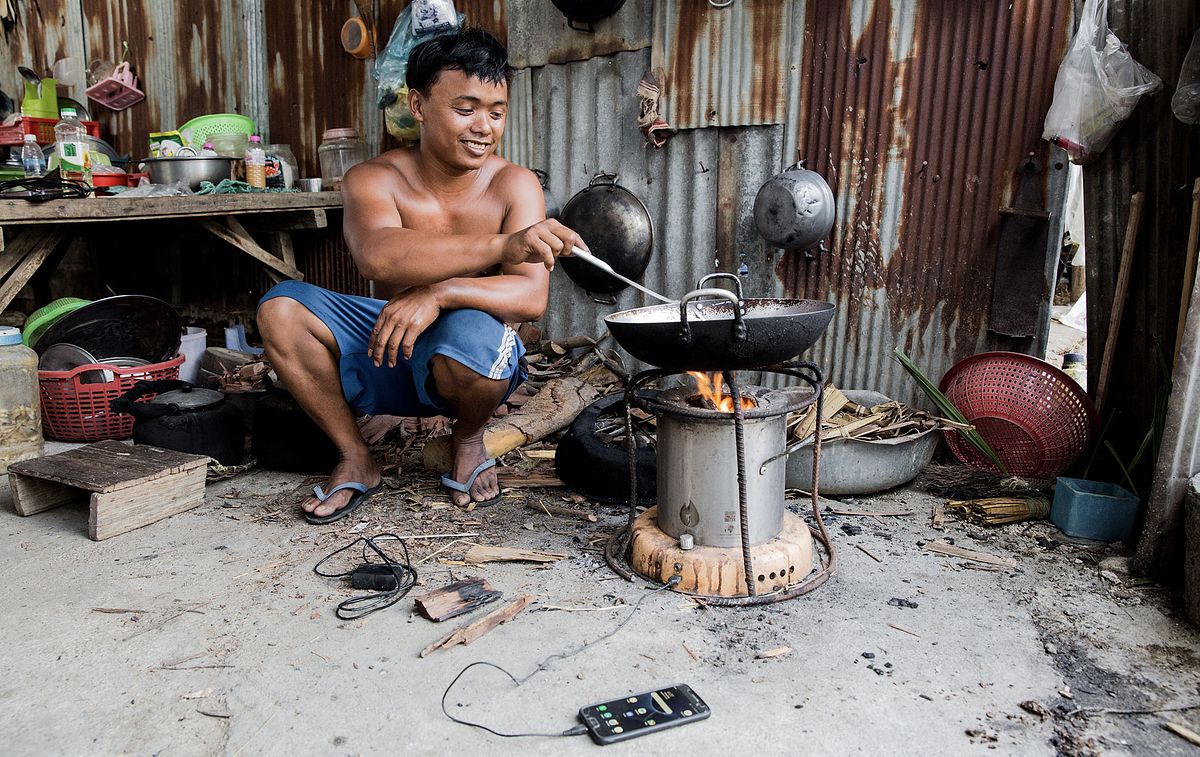 The social entrepreneur believes that data from the smartphones will make it easier to measure impact: “Based on the number of hours that the unit is used, you can calculate how much wood has been offset, how much health impact it’s had and various other things.” Further down the line, he’s hoping that there can be a reward related to the positive impact that’s created. “If we can use money to incentivise the user to keep doing that, then you create a really virtuous cycle.”

Ruben, who is based at the Impact Hub in Amsterdam, studied environmental engineering in Australia. In 2009, he started a bamboo flooring company as a sustainable alternative to wood. It is still in existence but he sold his shares when he embarked on ACE with his father. African Clean Energy has expanded to include his sister as the head of operations and his brother working in Cambodia as country director. Ruben’s father, an expert in manufacturing, has helped set up their factories in Lesotho and Cambodia, with Uganda meant to follow later this year if the global complications of Covid-19 don’t hamper progress. 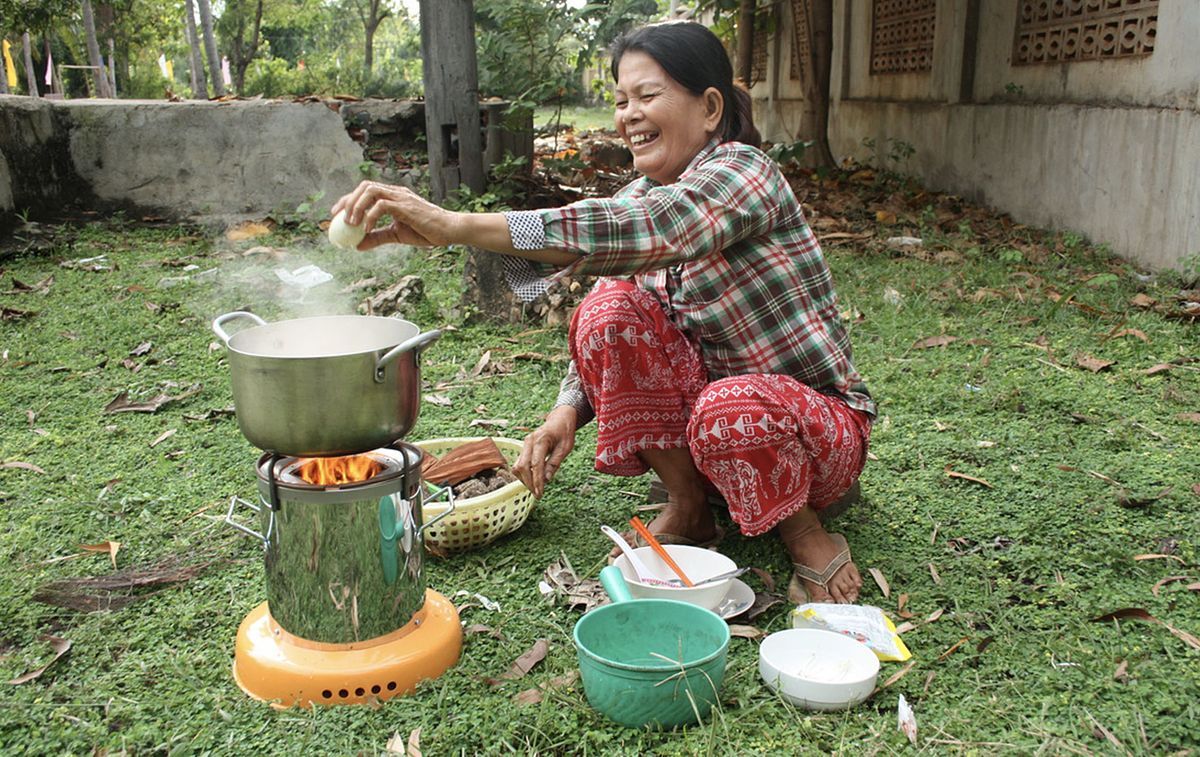 The CEO acknowledges that running a business with family members at the helm might not be for everyone, but there’s logic behind his decision: “When you are starting a fairly complex business with very little interest from investors and you can find competent people for not so much, it’s a fairly obvious way to go.” One big lesson he’s learned as a leader is to surround himself with people who are better at certain things than he is. The business now employs 193 globally and another 12 in Amsterdam; over 50% are women and that includes his mother, who is critical to running the Lesotho operation.

Despite decent growth, investment - or the lack of it - has been a perennial challenge. “We’ve been chronically short of having the necessary capital to have the impact we want,” he admits, “but that is slowly resolving itself.” One project co-funded with the European Union, for example, is allowing ACE to expand its mobile retail shops, giving more people access to its products and services.

In addition, a new round of fundraising will enable ACE to become a serious contender in this sector, Ruben believes. The injection of capital will help him to tackle the global issues he’s passionate about. “West African deforestation rates are absolutely terrifying,” he notes. “It’s something that I encourage people to look into, because I think when they do, they’ll realise that the path we’re on is ludicrously unsustainable." 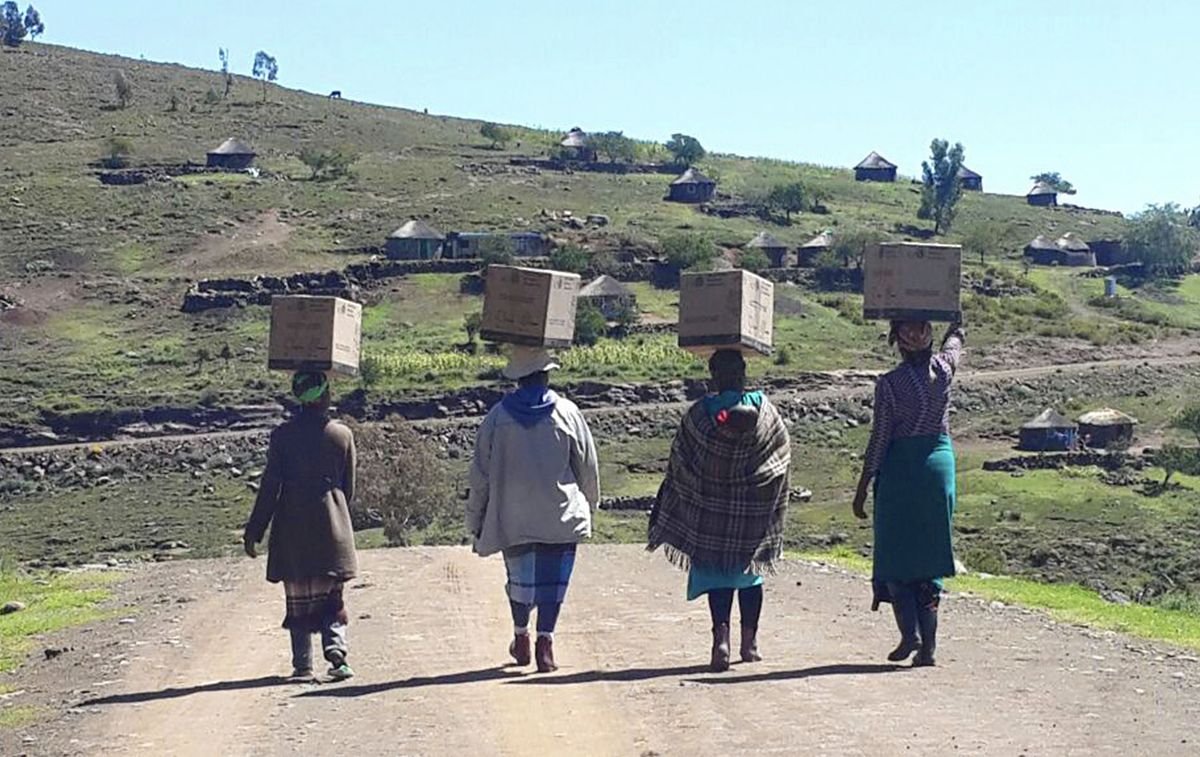 If the social entrepreneur is able to scale up the business more significantly, that’s a place he’d like to focus on. Ruben is frustrated, however, that his belief in ACE’s concept is not more widely understood as a compelling business case, as well as an imperative for the planet. “It’s an absolute no-brainer that this issue [of clean cooking] needs to be tackled and it needs to be tackled a lot more quickly, frankly, than we could achieve in the best-case scenario.”

Sometimes it’s lonely and sometimes the stress is really on you, but it’s also fun and it feels rewarding. I wouldn’t trade it for the world.

These challenges aside, Ruben wants to believe we are headed in the right direction. “I’m naturally very optimistic, so I can hardly imagine that we’re going anywhere but forward. At the same time, when I actually see the scope of the problems and the sheer amount of apathy and ignorance about where we are, yes, I’m certainly worried.” He calls on “smart people” working on Wall Street to come and make an impact where it’s needed most. “I know that the smartest people get paid really large amounts of money to do things that probably aren’t the most essential things we should be doing right now.”

When Ruben isn’t thinking about solving pressing problems, he enjoys being active, with snowboarding and football among his hobbies. In fact, he is now the proud owner of a football team in Lesotho that is sponsored by African Clean Energy. The ACE Maseru FC is coached by a well-known ex-footballer who was working for ACE as an HR manager. “For not very much, we generate a lot of excitement and joy. We’ve been quite successful,” the CEO says. The team was recently promoted to division A after winning the national division B title. 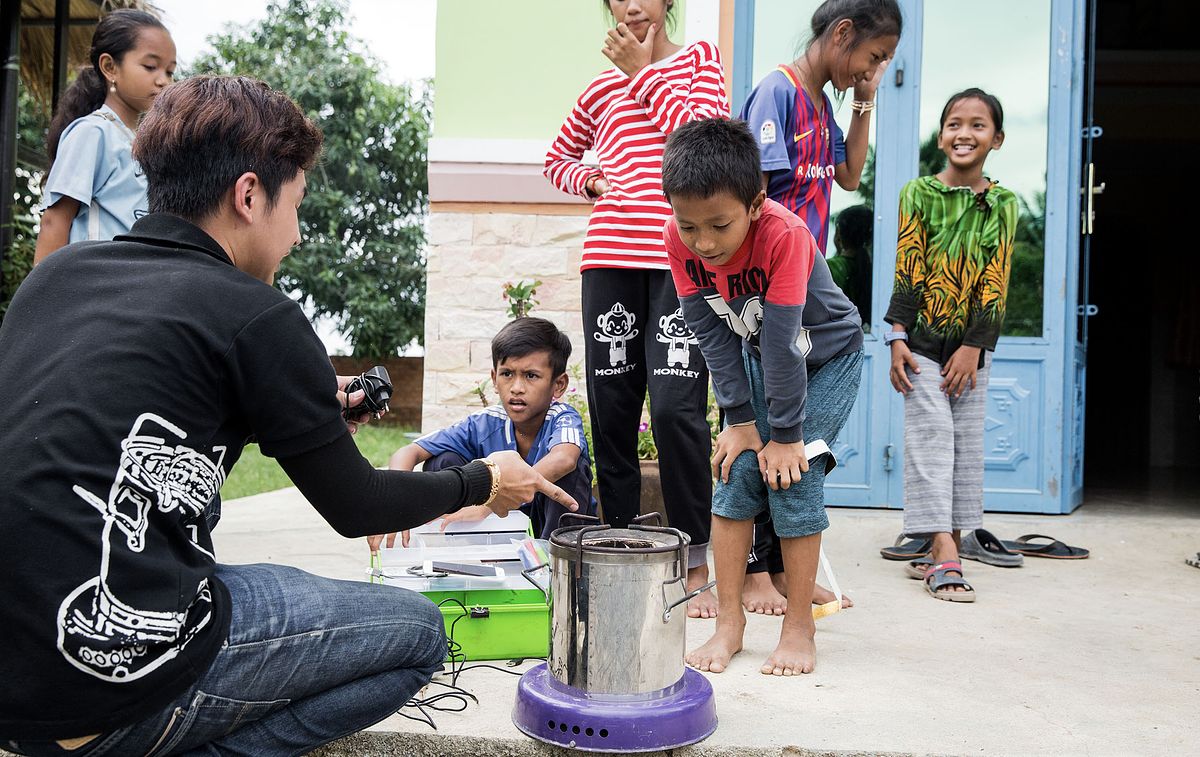 Not only is the team a way of reaching these neglected communities, it’s also providing something positive for locals to do - and the club has a solid fan base. “This is a country where we have 50 percent unemployment,” the social entrepreneur points out. “Opportunities for people, even if they are talented, are really limited, which is one of the things that makes me saddest of all.” In the face of some of these harsh facts, Ruben is unwavering in his belief in what he does: “Sometimes it’s lonely and sometimes the stress is really on you, but it’s also fun and it feels rewarding. I wouldn’t trade it for the world.”

Ruben Walker is the CEO and co-founder of African Clean Energy. To find out more about their work and the impact they have on their communities, visit the website. 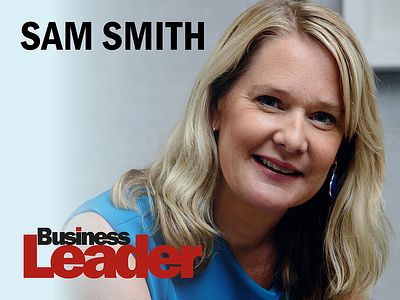 Responsible growth at the heart of a modern business 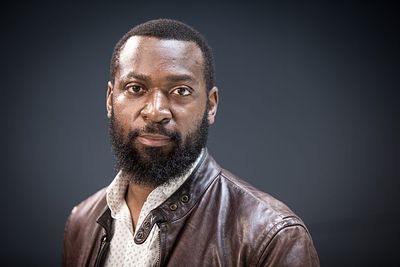 Startup pioneers of the post-pandemic world: your winners

The nominations are in! Sifted has selected over standout 80 European founders and companies shap... 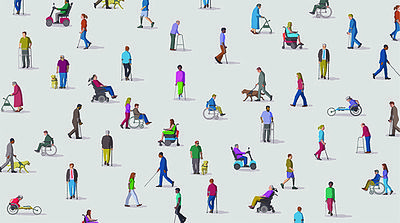