The Art of Impactful Investing

A pioneering name in the impact investing field, Laura Callanan, Founding Partner of Upstart Co-Lab, explains why we should be looking through a creativity lens.

While the Annual Impact Investing Survey compiled by the Global Impact Investing Network (GIIN) reveals that investors seeking environmental and social impact in addition to financial return are finding opportunities in micro-finance, housing, and many other areas -  it’s what was missing that caught Callanan’s attention. 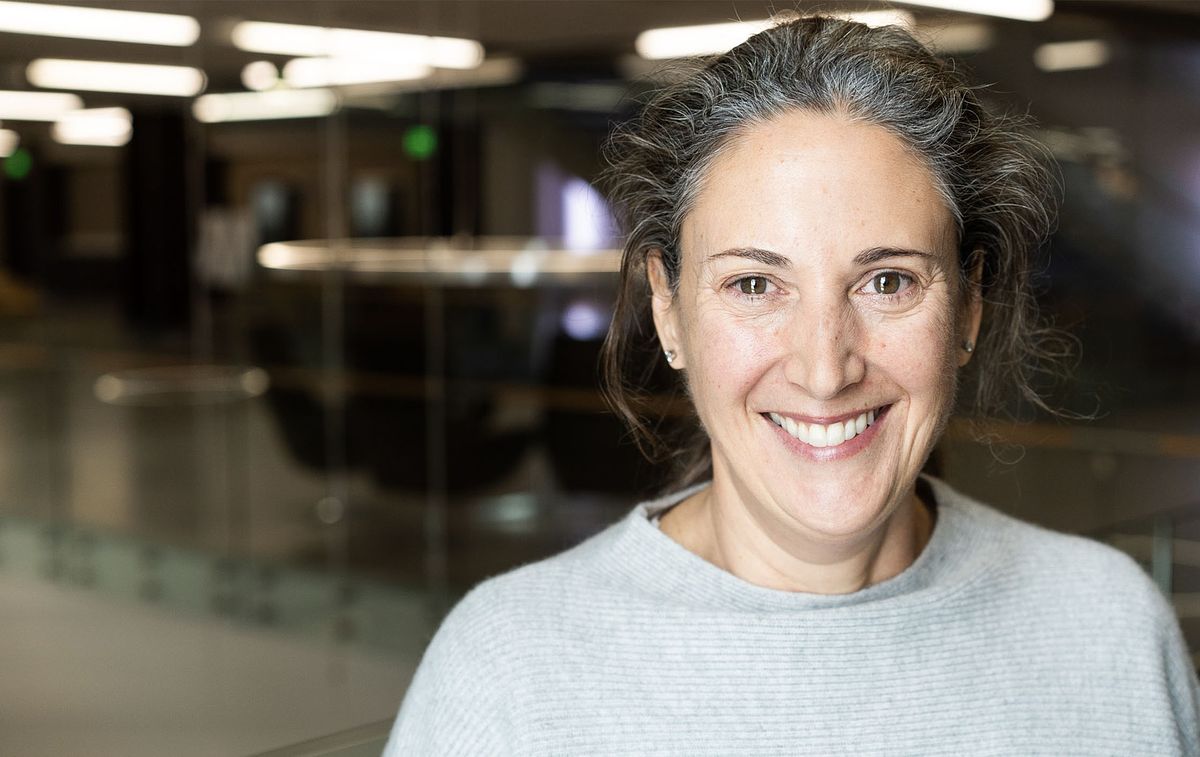 Arts and culture received 0.1% of GIIN member assets in 2019, with only 7% of respondents saying they allocate any assets to the sector. This is despite the creative economy accounting for 4.5% of US GDP and 3% of global GDP.

Callanan noticed this impact investment-shaped hole in arts funding while working in the Obama Administration as Senior Deputy Chair of the National Endowment for the Arts (NEA). “From my perch at the NEA I saw both a gap and an opportunity,” she said.

“Government funding for the arts in the United States is quite small. The annual budget of the federal arts agency is about $155 million a year. Philanthropy makes up for some of this, with around $20 billion a year directed to arts and culture. But there is $12 trillion of socially responsible capital in the US. The question was how to get some of this socially responsible or impact investment capital focused on the creative sector.”

Callanan, whose late husband is renowned playwright and novelist Romulus Linney, had long recognized people working in the arts as social entrepreneurs.

There is a whole set of creative entrepreneurs who have been over-looked and under-estimated.

During a career where she worked on Wall Street, led the Rockefeller Foundation’s first impact investment efforts, and advised the largest global foundations and NGOs on social entrepreneurship and social impact bonds as a consultant at McKinsey & Company, Callanan spent time with some of the top writers, actors, composers and painters in the United States. 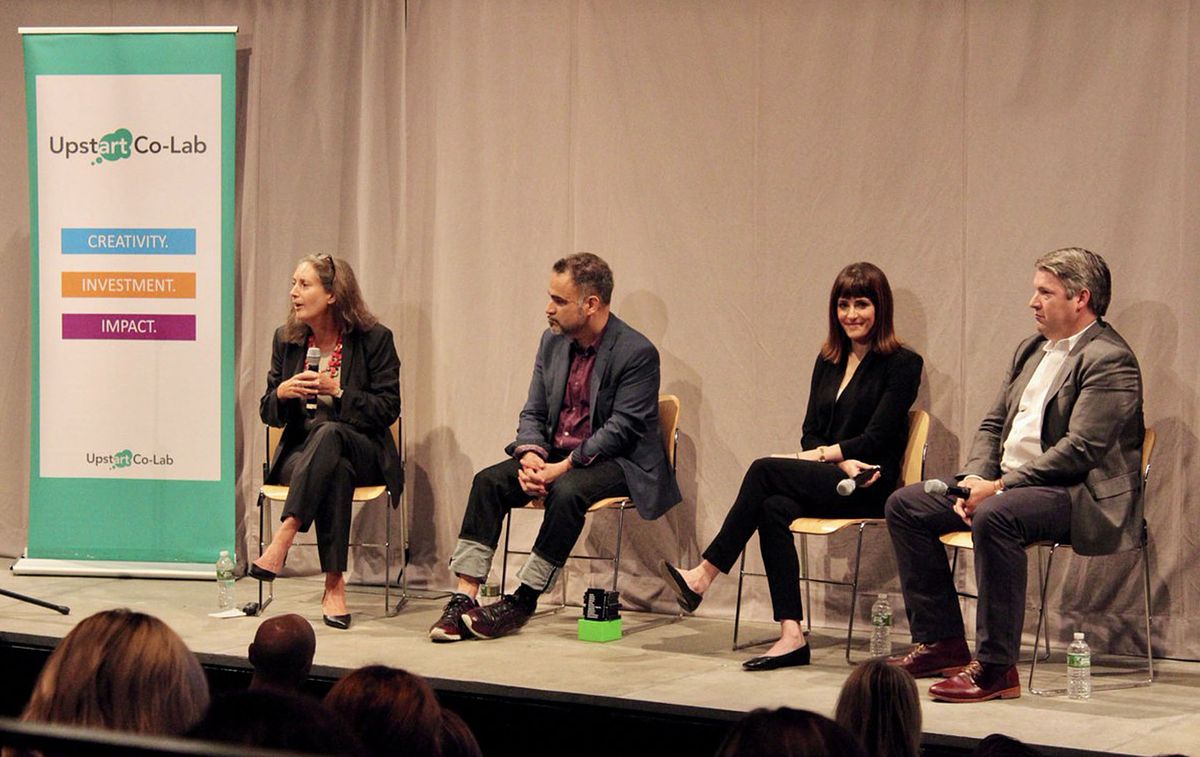 “I had a eureka moment in 2010 after lunch with a friend, the founding artistic director of a theatre company in New York,” she says. “He was describing his vision for the theatre lobby as a community green in the middle of Manhattan, open to everyone whether or not they’d bought a ticket to see the show. Keeping ticket prices to $25 for every seat at every show, so that going to the theater would be accessible and the audiences diverse. I realized he was a social entrepreneur, but no one was calling him that because he worked in the arts, and he wasn’t calling himself that because he worked in the arts. There is a whole set of creative entrepreneurs who have been over-looked and under-estimated.”

The issue, then, was how to connect the dots.

In 2015, along with an advisory board of global leaders in the impact investing space, Callanan founded Upstart Co-Lab, a pioneering organization connecting impact investors with funds, businesses and real estate projects that are driving environmental and social change through the creative economy. Upstart’s mission is to create opportunities for artist innovators to deliver social impact at scale.

“Inherently we’re trying to connect two worlds that haven’t yet found each other,” says Callanan, describing Upstart’s role as a catalyst and connector building the ecosystem for impact investing in the creative economy.

“We knew that entrepreneurs working in the creative sector were driving the same impacts as other social entrepreneurs – impacts related to the environment, quality jobs, inclusion and social justice. And we wanted to show impact investors that all the impacts they were looking for could be achieved by investing in a segment of the economy they had overlooked.”

Paving the way for impact fund managers and impact wealth advisors to focus on the creative sector, Upstart has learned from gender lens investing – the practice of investing in projects which benefit women.

We wanted to show impact investors that all the impacts they were looking for could be achieved by investing in a segment of the economy they had overlooked.

“We realized we were introducing a ‘creativity lens’ to the impact investing conversation,” says Laura. “I turned to my friends who are leaders of the gender lens investing movement and asked, can we borrow from your experience? They shared a three-part recipe: Make the case. Build the coalition. Bring investable products to market.” 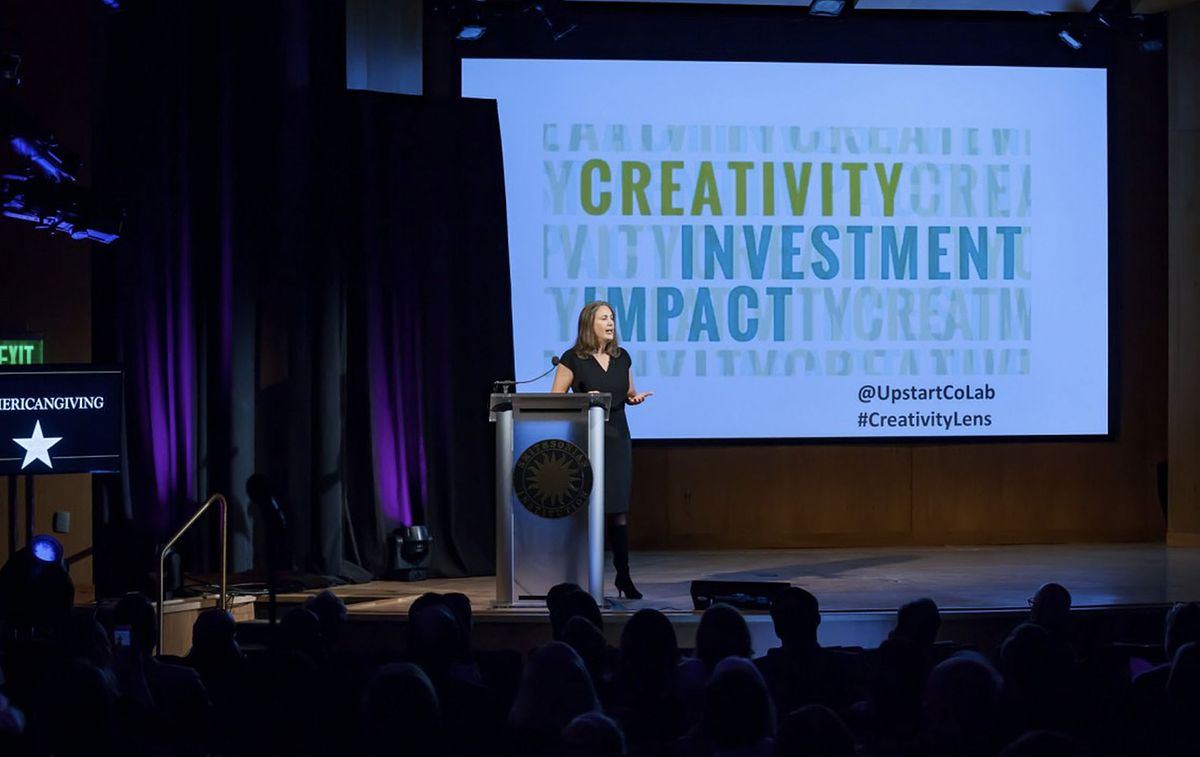 It’s a recipe that Upstart, which is part of a larger non-profit, Rockefeller Philanthropy Advisors, has followed. It’s been ‘making the case’, promoting the benefits of investing in the creative economy, by conducting original research, writing opinion pieces, and courting earned media. Upstart has published deep dives on creative industries such as fashion, food and media, and a look back on how low-income communities have historically benefitted from investment in creative spaces and businesses.

To ‘build the coalition’, Upstart recently launched a member community. A set of pioneers who are well-regarded in the arts and culture community, the group is a mix of experienced impact investors who want to actively target the creative sector, and art lovers, endowed arts organizations and foundations focused on the arts who want to begin their impact investing journey.

Upstart is also ‘bringing investable products to market’, making it easier for stakeholders to put their money to work. It launched an impact fund for the inclusive creative economy with community development finance institution the Local Initiatives Support Corporation (LISC) in 2018. The fund financed affordable workspace for New York City creative industries, and generated jobs for middle- and low-income workers. Upstart is now working with LISC to make the fund national. It’s also working with Community Investment Management and Nest on a global working capital fund for artisan businesses.

Right now Upstart is focused on persuading arts leaders and art lovers to get up to speed on impact investing. “I start the conversation with a bad joke,” Callanan says. “Why should people who care about the arts, care about impact investing? Because, in the words of the great American bank robber Willie Sutton, that’s where the money is.”

Laura Callanan is the Founding Partner of Upstart Co-Lab, find out more about their work increasing opportunities for artists as innovators on their website.